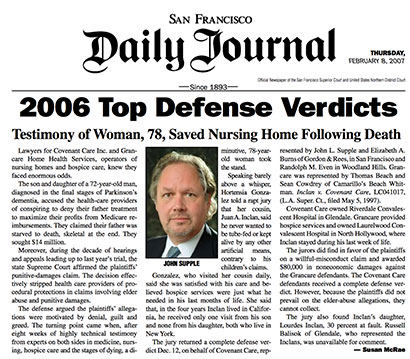 The son and daughter of a 72-year-old man, diagnosed in the final stages of Parkinson’s dementia, accused the health-care providers of conspiring to deny their father treatment to maximize their profits from Medicare reimbursements. They claimed their father was starved to death, skeletal at the end. They sought $14 million.

The defense argued the plaintiffs’ allegations were motivated by denial, guilt and greed. The turning point came when, after eight weeks of highly technical testimony from experts on both sides in medicine, nursing, hospice care and the stages of dying, a diminutive, 78-year-old woman took the stand.

Speaking barely above a whisper, Hortensia Gonzalez told a rapt jury that her cousin, Juan A. Inclan, said he never wanted to be tube-fed or kept alive by any other artificial means, contrary to his children’s claims.

Gonzalez, who visited her cousin daily, said she was satis ed with his care and believed hospice services were just what he needed in his last months of life. She said that, in the four years Inclan lived in California, he received only one visit from his son and none from his daughter, both who live in New York.

The jurors did find in favor of the plaintiffs on a willful-misconduct claim and awarded $80,000 in noneconomic damages against the Grancare defendants. The Covenant Care defendants received a complete defense verdict. However, because the plaintiffs did not prevail on the elder-abuse allegations, they cannot collect.

The jury also found Inclan’s daughter, Lourdes Inclan, 30 percent at fault. Russell Balisok of Glendale, who represented the Inclans, was unavailable for comment.